One of the most important Vilnius events is coming up! On 25th of January Vilnius is celebrating it's 698th birthday. Let's learn how we know the exact date of Vilnius birthday and get some ideas what to do in Vilnius on this important day!

Why 25th of January? History of Vilnius

A famous legend tells us that the Grand Duke Gediminas was on a hunting trip in the forests of Šventaragis valley where rivers Vilnia and Neris meet (around present day Cathedral square in Vilnius Old Town). When night fell, the party, feeling tired after a long and successful hunt, decided to set up camp and spend the night in the valley. While the Grand Duke of Lithuania Gediminas was asleep, he had a dream of an iron wolf standing on the top of a hill with its head raised proudly towards the moon howling as loud as hundred wolves. Awakened by this strange vision, the Duke immediately consulted the pagan priest Lizdeika about it. The latter told the Duke that the dream was a sign from the Gods. The iron wolf, explained the priest, was the symbol of a city, a great capital. This future city will be as strong as iron and as famous across the world as hundred wolves howling! And who was tasked to build this incredible city? The Grand Duke Gediminas of course!

Did the Grand Duke actually slept in the woods in the middle of January? Our pagan rulers were not famous for keeping calendars and work schedules … How do we know that it happened precisely on 25th and not 28th ? Well, usually it’s the first known historical mention of city's name that is celebrated as birthday.

So when was Vilnius mentioned for the first time ever? Apparently, after his dream the Grand Duke of Lithuania, obeying the will of gods, started to build the future capital immediately. Gediminas wanted to make Vilnius the greatest city of all, but he did not have many resources. Pagan Lithuanians were not known as city dwellers. So Gediminas started the greatest marketing campaign of 1300s – writing letters to Western Europeans to promote people and invite masters to settle in newly founded capital. 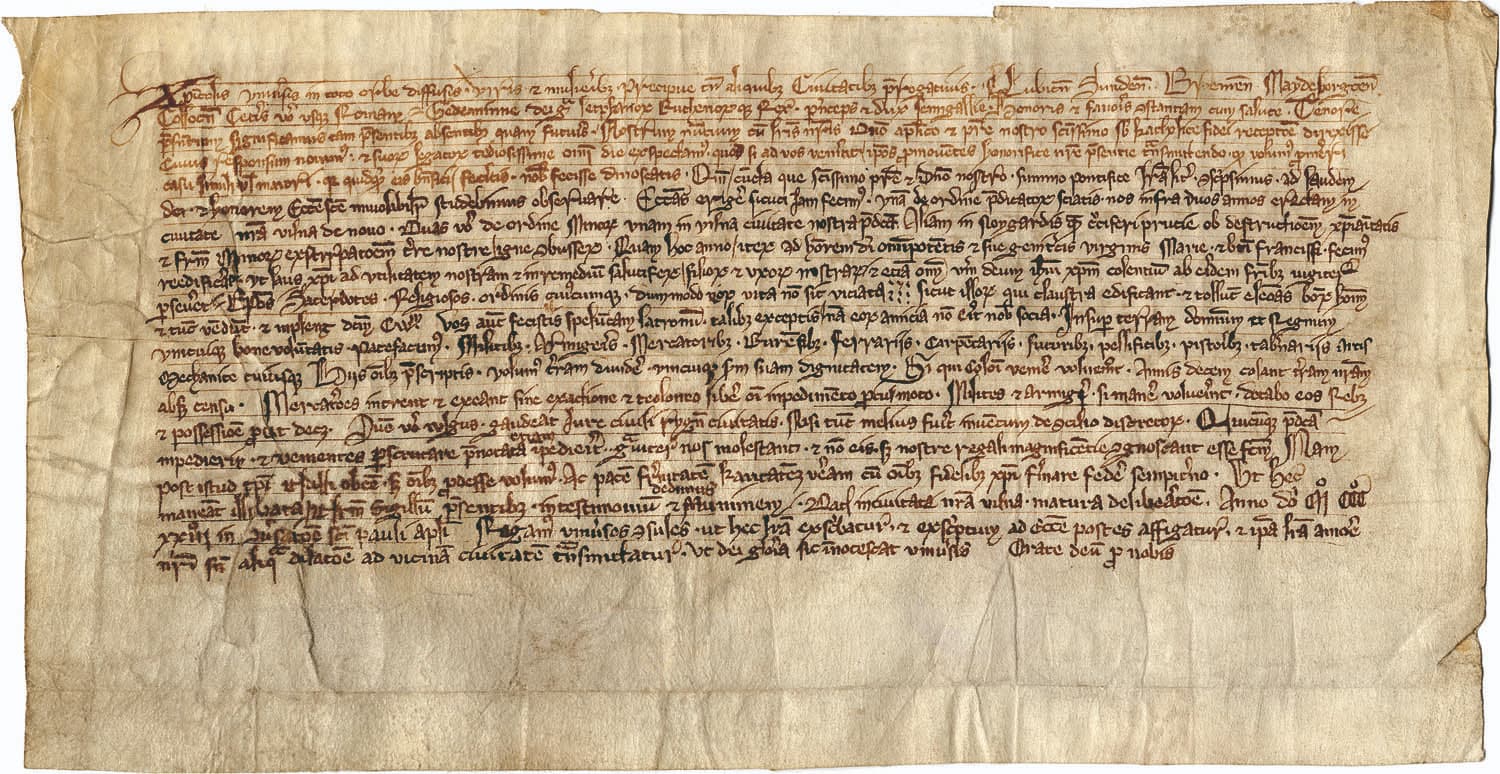 There are 6 surviving transcripts of letters of Gediminas written in 1323–1324. In the second letter written on January 25, 1323 to the German cities of Lübeck, Sund, Bremen, Magdeburg, Cologne and other cities in the Holy Roman Empire, Gediminas explained that the Grand Duchy of Lithuania, even though a pagan country, was very tolerant to the Christians. He invited knights, squires, merchants, doctors, smiths, wheelwrights, cobblers, skinners, millers, and others to come to the Grand Duchy and practice their trade and faith without any restrictions. His invitation notably included German Jews as well as Christians, and its issuance is closely linked to the establishment of the Jewish community in Lithuania. The peasants were promised tax exemption for ten years. The merchants were also exempt from any tariffs or taxes. Nice offer, right?

And precisely in this letter Vilnius is mentioned for the first time already as the capital of the Grand Duchy of Lithuania! Therefore, 1323 is considered to be the official founding year of Vilnius and 25th of January (the date of the letter) is the reason that one of the most important Vilnius events in January is Vilnius birthday. Gediminas is considered to be the city's founder even though the city existed years before Gediminas' reign. However Gediminas was the one who made Vilnius a proper city.

How to celebrate Vilnius birthday? Here are some things to do in Vilnius!

PLAN A:  you can climb Gediminas Hill and start howling as a wolf!!! OK, we are joking…locals would probably think you are crazy. But writing letters is normal enough. If you have friends and family back at home, send them a letter like Gediminas did almost 700 years ago. Look how it worked out for Gediminas! Also we have so many beautiful postcards dedicated to Vilnius and it’s people. Here is the list of places to find them:

You can find post offices at Vokiečių street 7-13 or Totoriu street 8. Be like Gediminas, spread the word about Vilnius to the world. 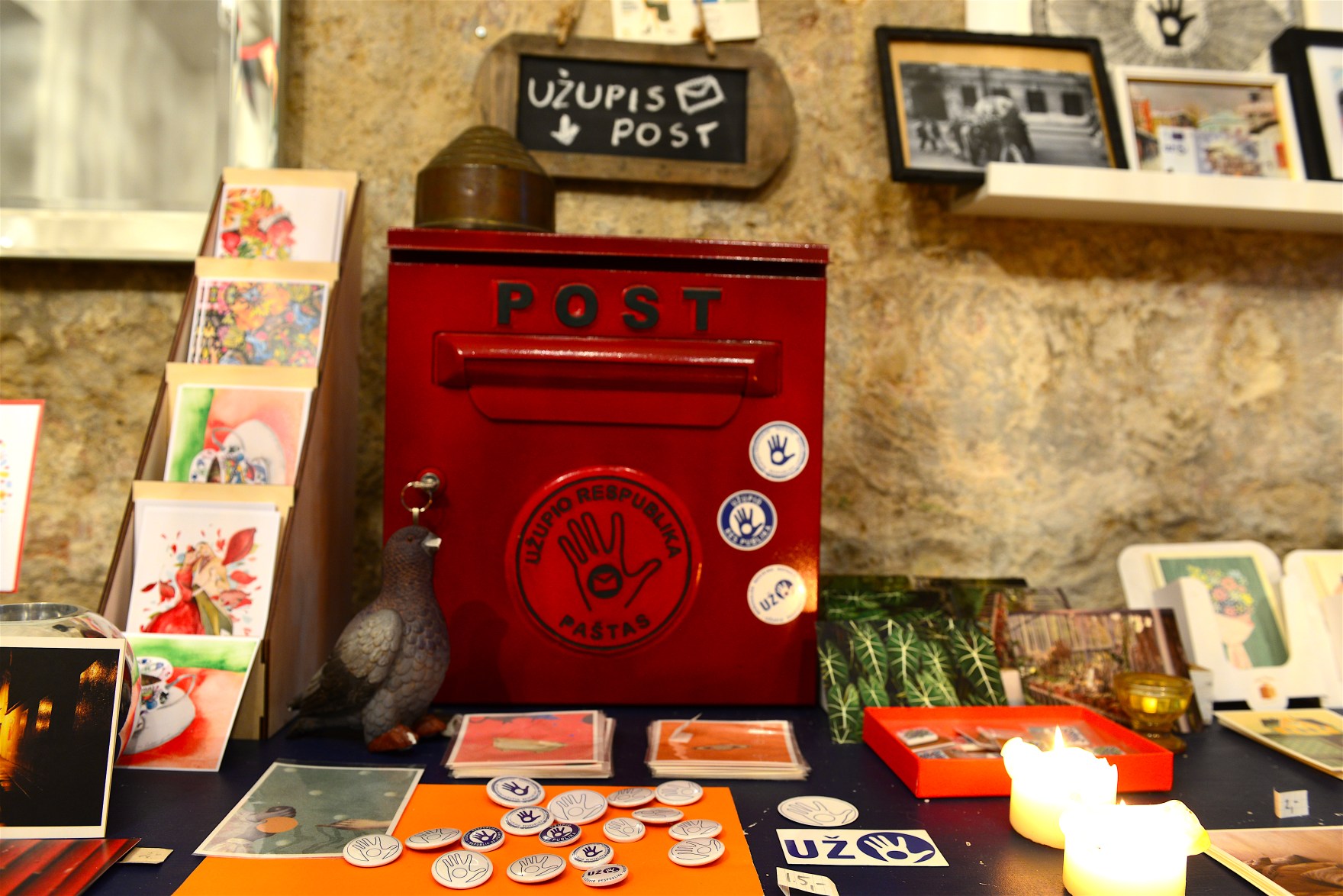 PLAN B: you can talk to the guy who started it all. No, we don’t suggest you should start calling spirits from another world with a spiritual séance. Simple phone call will be enough. Just go to one of the must see Vilnius attractions - the monument for the Grand Duke Gediminas - located at the Cathedral Square in Vilnius Old Town. Scan the QR code on the blue plaque and voilà – Gediminas is calling you! Never heard about this magic? Check out Vilnius Talking Statues program.  This is one the must things to do in Vilnius. And while you are chatting with Grand Duke, make a selfie with him!

PLAN C: The best Vilnius event locals are really excited about on Vilnius Birthday is Vilnius Light Festival! Unfortunately this year due to COVID-19, Vilnius light festival was moved to summer, 2021. However Vilnius will not leave it’s citizens without anything. Four main Vilnius bridges in the city center will be illuminated as well as Gediminas castle and… the sword of Gediminas! Yes! This is one the coolest artworks from Vilnius light festival that citizens of Vilnius fell in love with. Gediminas sword becomes as shiny as the swords of the Jedi from Star Wars. For a few days our beloved Vilnius founder Gediminas becomes Jediminas! 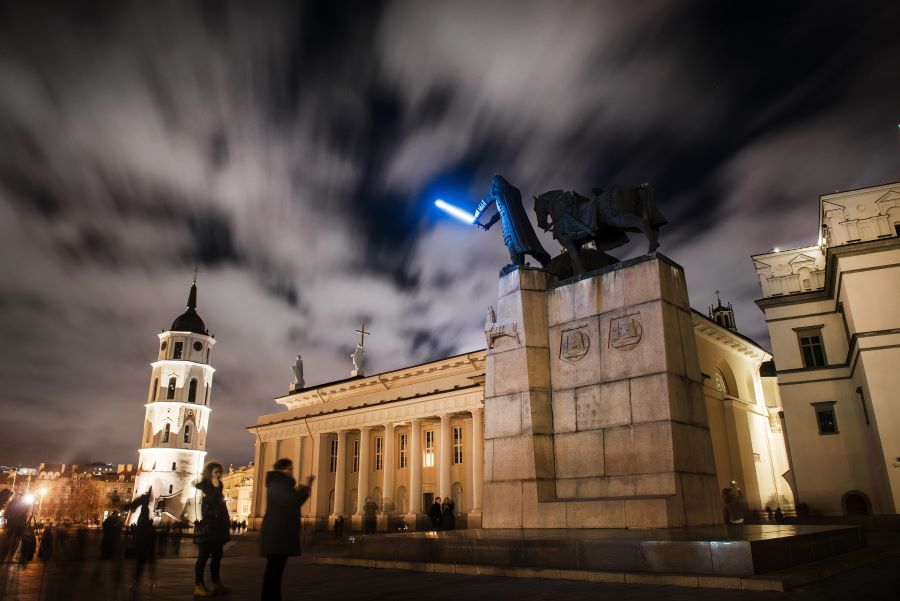 A picture from one of the most popular Vilnius evetns in winter - Vilnius Festival of Lights 2020. © Go Vilnius.

PLAN D: Celebrate Vilnius birthday at home! As the world is being shaken by global pandemic, this might be a very good idea! Vilnius made a special playlist on Spotify. You can also look for special food offers for Vilnius Birthday on Wolt and Bolt Food apps from 21st of January to 31st of January, 2021.

You can also get some ideas about what to do in Vilnius on it's birthday in our blog post about visiting Vilnius from your sofa!

PLAN E: Come to Vilnius in summer, 2021! Due to COVID-19, Vilnius birthday celebration was moved to summer (the exact date of Vilnius birthday events will be announced later this year) Or even better, come in 2023 when Vilnius be celebrating it’s 700 birthday! It is going to be amazing! Attend Vilnius events dedicated to it's birthday and join our Vilnius walking tours to learn more about this beautiful city and it's history! We can share stories, you will not find in the tourist guide book and show you hidden gems of Vilnius! On Soviet Vilnius tour and Jewish Vilnius tour we will explain to you the difficult and colorful history of Vilnius, Wilna and Wilno. During Alternative Vilnius tour will give you local insights, talk about living in Vilnius today and show you wonderful Vilnius street art scene. On Vilnius Ghost tour we will reveal gruesome stories locals would like to forget and try to scare you. Finally, on Vilnius food tour we will give you chance to smell and taste the city itself! Sounds like a great plan, doesn’t it?

This year due to COVID-19 one of the most likeable Vilnius events was moved to summer, 2021. However we hope this article helped you to understand why Vilnius birthday is celebrated on 25th of January and get some ideas about what do do in Vilnius on it's birthday!

In a few days Lithuania will celebrate one of it’s birthdays. February 16 is the day of Restoration of the State of Lithuania. It is also known as one of the Lithuanian Independence Days. U Read more ...