When the Jewish community moves in to a new location, one of the first thing they try to do is to find the location for cemetery. Establishing a cemetery always has been essential in Judaism – it arrives from religious laws defining how important it is to treat the dead people properly. In Hebrew the cemeteries are called in few various ways, f.e., beit kvarot (the house of the graves) or beit olam (the house of the eternity) which illustrates the importance of the cemeteries and the idea to protect them and save as long as possible. Unfortunately, most of the Jewish people were killed in the WW2 and during the Soviet times the remains of the Jewish cultural heritage and even the cemeteries were destroyed. Now the Lithuanian government protects the remaining Jewish burying grounds and in Vilnius you can still find few Jewish cemeteries. 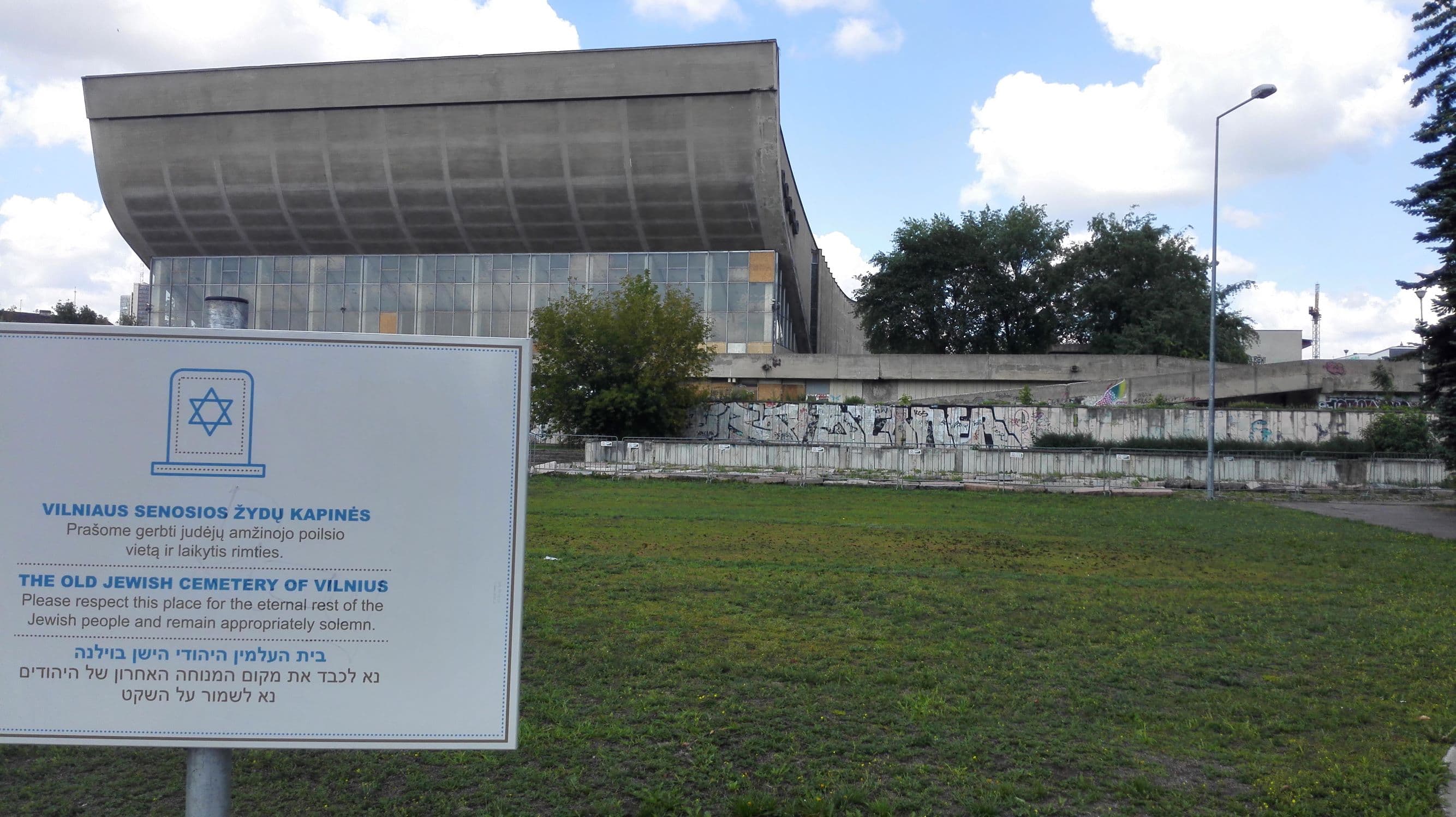 The view of the old Jewish cemetery in Šnipiškės today

The first Jewish cemetery in Vilnius was established already in 1487 in front of the upper castle (nowadays called Gediminas tower) on the other side of the river Nėris. The suburb where the cemetery used to be is now called Šnipiškės, therefore it is common to refer to the old cemetery as Šnipiškės Jewish cemetery. The graveyard served for needs of the local Jewish community until 1831 when the Russian tsarist government decided to modernise Vilnius and to improve the defensive system of the city. They reconstructed the castle in Vilnius and built a new fortress at the location of the Jewish cemetery. The tsarist government did not finish the whole project and some of the graves were still visible until 1956 when the Soviet government put an end to the graveyard by building a swimming pool there and in 1971 also a sport arena was made just in the middle of where the old cemetery used to be.

Many prominent and respected Jews rested in peace at Šnipiškės cemetery and the most famous Jewish scholar in Vilnius - the Gaon of Vilna – was also buried there. He (together with many others) was reburied in the modern cemetery (Sudervės cemetery, see below) and his grave is still a very respected and often visited place. Today the only reminder about the old cemetery is a monument in front of the abandoned Soviet sport arena.

Where? Olimpiečių str. (at the beginning of the street you will see the old sport arena and just in front of it you will find the monument, see the picture below) 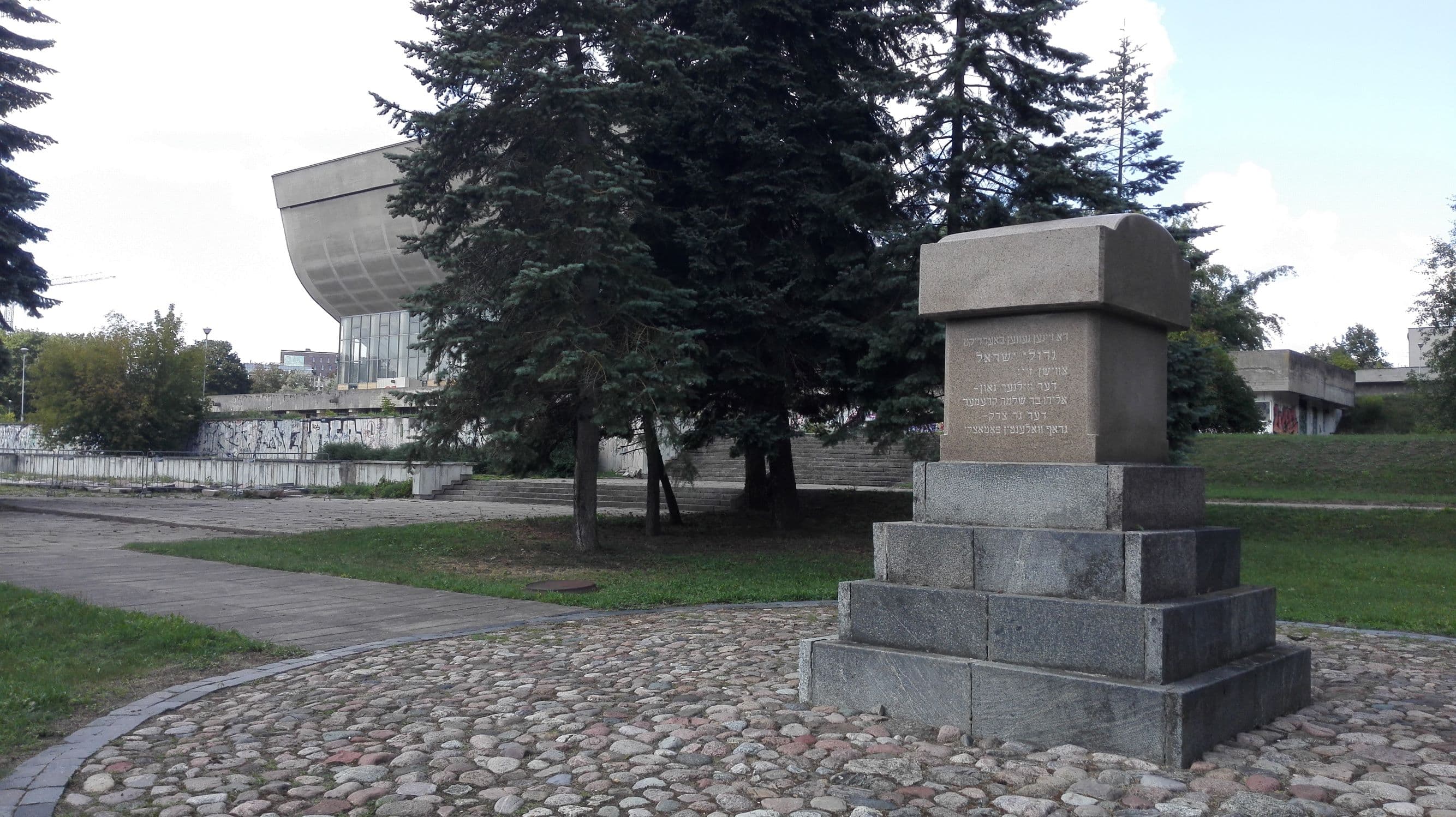 The monument dedicated to the Šnipiškės Jewish cemetery

The Jewish cemetery on Olandų str.

When the Tsarist government closed the old Jewish cemetery in 1831, the Jewish community started a new graveyard a little bit more outside from the city – in the area of Užupis on Olandų str. Many famous Jewish people were buried there: the owner of printing Romm publishing house Menahem Mann Romm; the founder of the famous library in Vilnius Matityahu Strashun; the historian and author Samuel Joseph Fuenn; doctor, social and political activist Zemach Shabad, who became the prototype of the Russian book Doctor Aybolit (Russian Доктор Айболит) and many others.

Also some of the graves from the Šnipiškės cemetery (one of them was the grave of Gaon of Vilna ) were moved to the Olandų str in 1948. The cemetery was huge and expanded during the XIXth century as the Jewish community bought some new lands and it is estimated that around 70 000 people were buried at the Olandų cemetery 1830-1939. The territory was divided in different sections where people were buried according to their occupation and status in the society. The graveyard was used until 1948 when the Soviet government closed it and it was liquidated in 1961.

You may start thinking why the Tsarist Russian and the later Soviet government wanted to close the Jewish cemeteries. Actually there were few reasons for that: first of all, the Jewish cemeteries, especially the old one, were at very central and convenient locations, which were supposed to be modernized and used for needs of all the citizens in Vilnius. Moreover, the Tsarist Russian government implemented restrictions on Jewish religious life, destroyed the cultural and historical sites in order to integrate the Jewish people into modern society, while the Soviets would promote the idea of atheism and would not support any religion. Therefore, the Jewish cemeteries were considered not to be important. The Soviet government also used the excuse that Jewish cemeteries were forgotten, abandoned, they did not look nice and were needed to be cleaned.

When the cemetery was liquidated some of the bodies of the famous people were reburied in the new cemetery (Sudervės), but most of the bodies were not touched. However, what was done to the gravestones is just unbelievable: many of the tombstones were used for making stairs and walls of the new Soviet buildings in Vilnius.

Today at the site of the cemetery you can still find few old graves and a monument which is made of those old original tombstones (they were taken out from the constructions of buildings) to remind the people about the history of the place. Lithuanian government has registered the remains of the cemetery as a protected and respected historical site.

Where? Olandų str/ Krivių str 123: when you find Olandų street, stay on the left side of the road and the third to the left will be Krivių str. The monument of the cemetery is already visible from the Olandų str. The view of the Olandų Jewish cemetery

The only still used Jewish cemetery is around 6 km away from the Old town and it got the name from the Sudervės street where it is located. The Jewish community needed more space and bought the land for the cemetery outside from the city before the WW2 and the first people to be buried there were the prisoners of the Ghetto. After the WW2 the Soviet government gave a part of the Jewish cemetery to the Christians, but the two different sections of it – Jewish and Christian – are now separated. Though it is relatively recent, the cemetery has become the rest place to all the most important and famous Jewish personalities as the graves were moved from both Olimpiečių and Olandų graveyards to the Sudervės cemetery. Today there you can find many monuments dedicated to the victims of Holocaust, different events and personalities and the most visited grave is the mausoleum of the Gaon of Vilna. The Sudervės cemetery unites the all Jewish cemeteries in Vilnius and the tombstones together with the monuments guide the visitors through the rich history of the Jewish people in Vilnius.

The mausoleum of the Gaon of Vilna

Where? Sudervės str 28. (It is easiest to reach the cemetery by car/taxi. If you decide to take the public transport, you can take the bus nr 46 from the Green Bridge (‘Žaliasias tiltas’) and you would go until the stop ‘Vaikų kaimas’. It takes approximately 15min by bus + you would walk for 5min more until you reach the cemetery.)

When to visit? From 9am to 7pm (except Saturdays and other Jewish holidays). On Sundays and during the winter season the cemetery is opened until 4pm.

Are you interested to learn more about Jewish comminity and sites in Vilnius? Make sure to join our regular Jewish Tour every Friday and Sunday at 10 AM.  Also, check out our other articles here.

Updated 22/10/2020 Before the WW2 Vilnius was known as Jerusalem of Lithuania and was the most important educational and cultural centre for the Jewish people in the region. Today Vilnius old Read more ...

Synagogues in Vilnius - what is so confusing about them?

Updated 23/11/2020 Until WW2 Vilnius was known as ‘Jerusalem of Lithuania’. At least one third of the people living in Vilnius were Litvaks – Lithuanian Jews. There were more than Read more ...