Haven’t you heard? Lithuania was the biggest country in Europe! Yes, it was back in 15thcentury, but we Lithuanians are still very proud of this fact. Maybe because of this reason every summer we have number of festivals dedicated to experimental archeology, historical crafts, medieval fairs and knight duels. The participants of those festivals are truly walking encyclopedias of their crafts and time periods. And locals have a tradition to visit at least one of the events every year. In this post we will suggest couple of festivals you should not miss while visiting Lithuania.

Kaunas is the only city in Lithuania that is currently a member of the new Hansa Union. In May the city celebrates Kaunas Hansa Days. During the event knights fights and competitions take place, as well as folk art fair; various music and dance groups entertain the viewers, traditional games are organized at the Kaunas castle grounds, acrobats, jugglers and jokers play, there is also archery shooting and plays performed under the open sky. As well this is not only a medieval festival, but a whole city celebration, because the rest of the Old town is usually filled with sounds of jazz, rock, orchestra and folk music and performances of various kinds. Trakai can offer more than one medieval festival. This one is happening in the middle of June and is held at the ruins of peninsula castle. During the day guided tour through the Peninsula Castle are held and educational programs are prepared for adults and children alike. However, the highlight of the day is the evening’s great fight: the battle between the armies of the Teutonic Order and the Grand Duchy of Lithuania.

WHEN: Special events are held in May, September and even October   |   WHERE: Medininkai, Lithuania (32 km South East from Vilnius)    |    More: https://www.facebook.com/Medininku.pilis/

Back in the medieval times Medininkai was one of the largest towns and defense centers of Lithuania. However for very long time the symbol of this place – the castle – stood in ruins. Now, partly rebuilt, the castle is revived for a new life. Museum is open daily and medieval reenactments and events are held here couple times a year. Not even snow can scare true history enthusiasts! 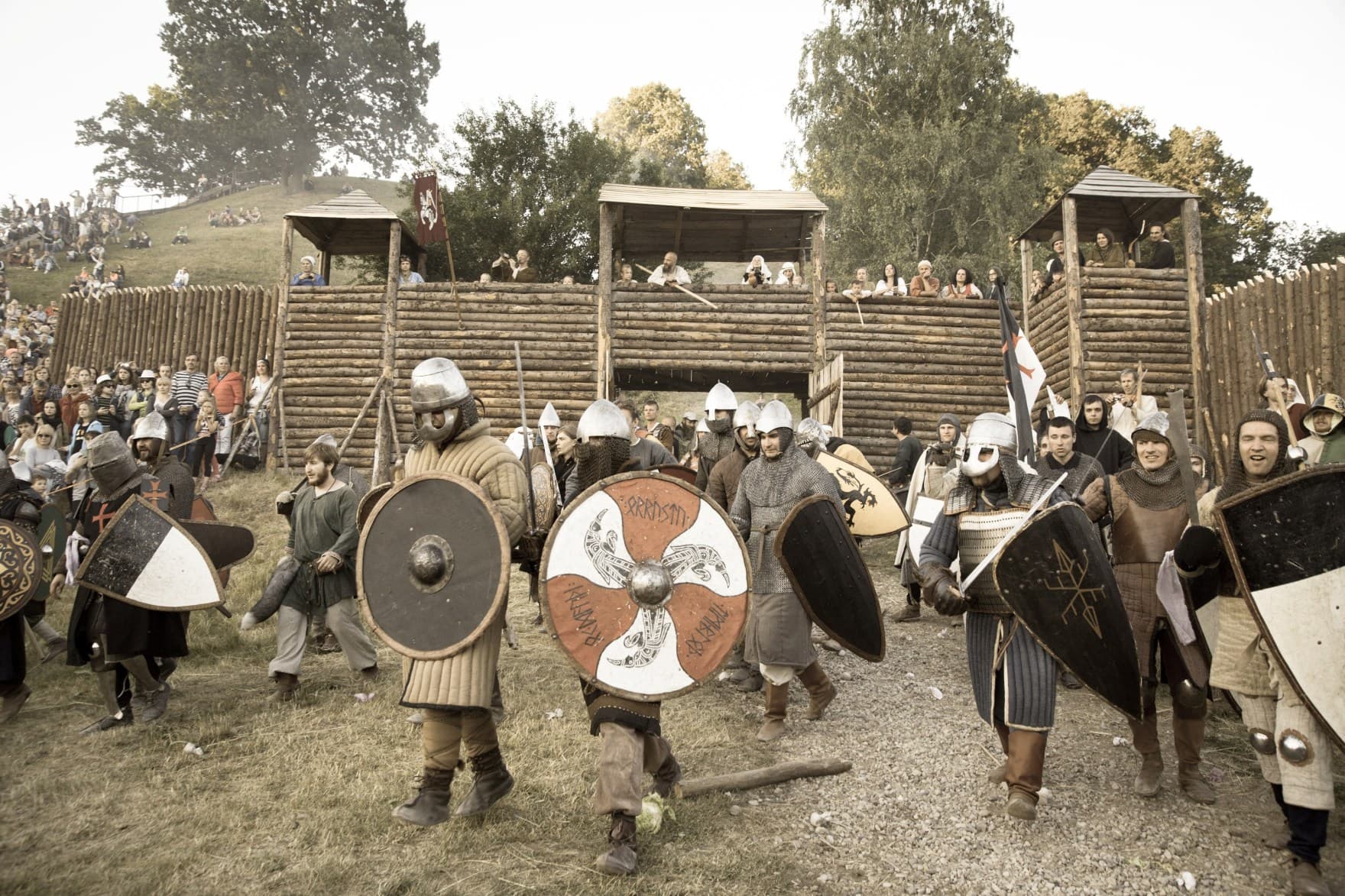 Gates of Jotva is the largest living history festival in southern Lithuania dedicated to the history of Alytus and Baltic nation Jotvingiai that once lived here. Every visitor is encouraged to become part of the festival community by joining ancient crafts workshops, dancing or young soldier training routines, archers’ competitions or lectures. The most impressive part of the festival is the reenactment of attack of the castle gates, which are built every year for this occasion! So wake up Baltic soldier in your heart and let’s open the gate to our history! Days of live archeology in Kernavė

Happening already for 19th time the festival of experimental archeology introduces the restored crafts  and lifestyles of our ancestors of prehistoric and early medieval periods. If you were wondering what people were wearing, eating or hunting back in Neolithic age – you cannot miss this event. Visitors have an opportunity to strike the flint, throw pottery, mint a coin, and try their hand at archery. Archaic music concerts and dances are held there as well, while military camps offer you chance to try out some of the armors of early medieval times. Why this event is different from other medieval festivals? Because during two days in August you can experience how the medieval castles looked like, smelled like and sounded like back in a day. All the craft stands as well as kitchens are located in the inner courtyard of the castle. Feels a bit like Game of Thrones, to be honest. Educational programs, theatrical performances and games are organized as well. And of course some medieval fighting!

One of the most important Vilnius events is coming up! On 25th of January Vilnius is celebrating it's 698th birthday. Let's learn how we know the exact date of Vilnius birthday and get so Read more ...