Before the WW2 Vilnius was known as Jerusalem of Lithuania and was the most important educational and cultural centre for the Jewish people in the region. Today Vilnius old town is still full of sites reminding of the Jewish history in Vilnius. If you are interested in Jewish history, we recommend you to visit these five places in Vilnius. The historical Jewish quarter is located in the middle of Vilnius Old Town, where the small Vilna ghetto was established during WWII where about 11 000 Jews were kept for two months until October 1941. The area covers the Gaono, Žydų, Stiklių and Antokolskio streets. This neighbourhood is one the first places where Jews settled down in Vilnius. In the 17th century this quarter became more famous because of the glass market. As Jewish population in Vilnius was growing constantly, Jews started settling in other parts of the city as well and quite a big area between two main streets in Vilnius Old Town was mainly populated by Litvaks - Lithuanian Jews. During WWII, the Great Vilna ghetto was established here very close to the small Vilna Ghetto where around 30000 Jews were kept for approximately two years until September 1943. When you walk around this part of the city today, you should loook for signs, monuments, artworks, memorial plaques and information stands reminding us about Jewish history in Vilnius. To explore this are the best, we would recommend you to join Jewish Vilnius tour with knowledgeable local guides and get into detailed Jewish history in Vilnius in around 2 hour walking tour. However if you are not able to join the tour or prefer to walk around by yourself, here is what you can find in this area: @ The wise man from the project Walls that remember

While wandering around the cozy narrow streets of Vilnius Jewish quarter you will find #wallsthatremember artworks depecting Jews who were photographed in Vilnius before WWII. The first artowork was unveiled in summer, 2019. Today you can find six Walls that remember artworks in the part of Vilnius Old Town where Jews used to live. It seems this project was a big success and the artists are travelling around Lithuania depicting Jews from old photographs in other towns (shtetls) in Lithuania like Salantai, Utena, Merkinė. 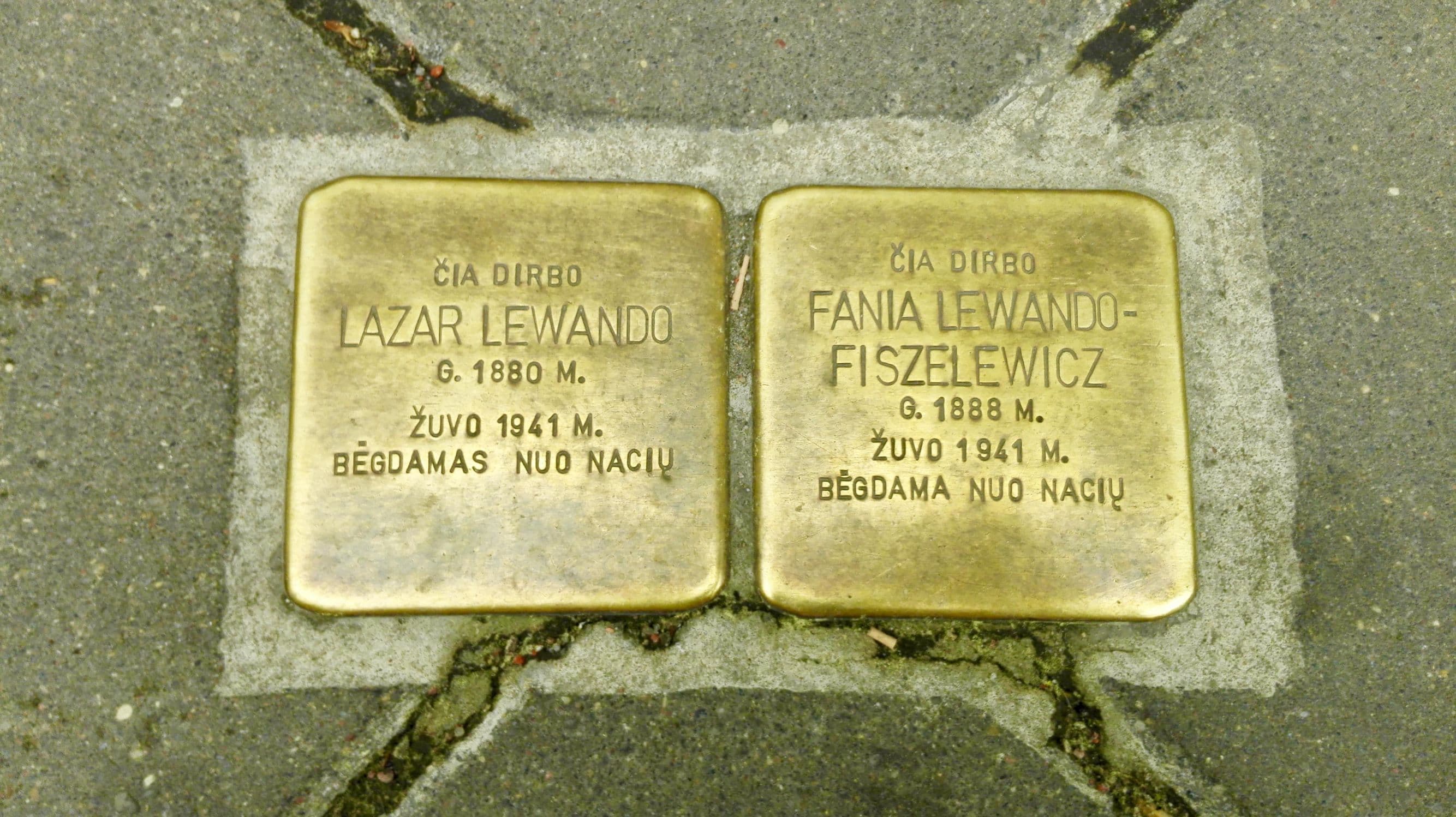 While walking around the territory of both Vilnius Ghettos you will find the memorial plates dedicated to the Ghettos (at least three), the Greater synagogue of Vilna, Vilna Gaon. Those are quite easy to spot, however there are some plaques not so easy to find because they are on the ground - Stolpersteine. Those memorial plaques were installed in the pavement of Vilnius by Gunter Demnig – the famous German architect and artist who is the founder of this international project which is already in 18 European countries. In Vilnius we have 8 memorial plaques and every stone commemorates Jewish people who lived in Vilnius before the WW2. You can find these plaques not only in Vilnius Old Town on Rūdninkų, Vokiečių streets, but also in Vilnius city centre in Vilniaus, Islandijos and Vasario 16-osios streets. Every stone shows the name of the person, dates of birth and death and just makes you stop for a while. Do not forget to look down to find them.

Monuments to the Jews 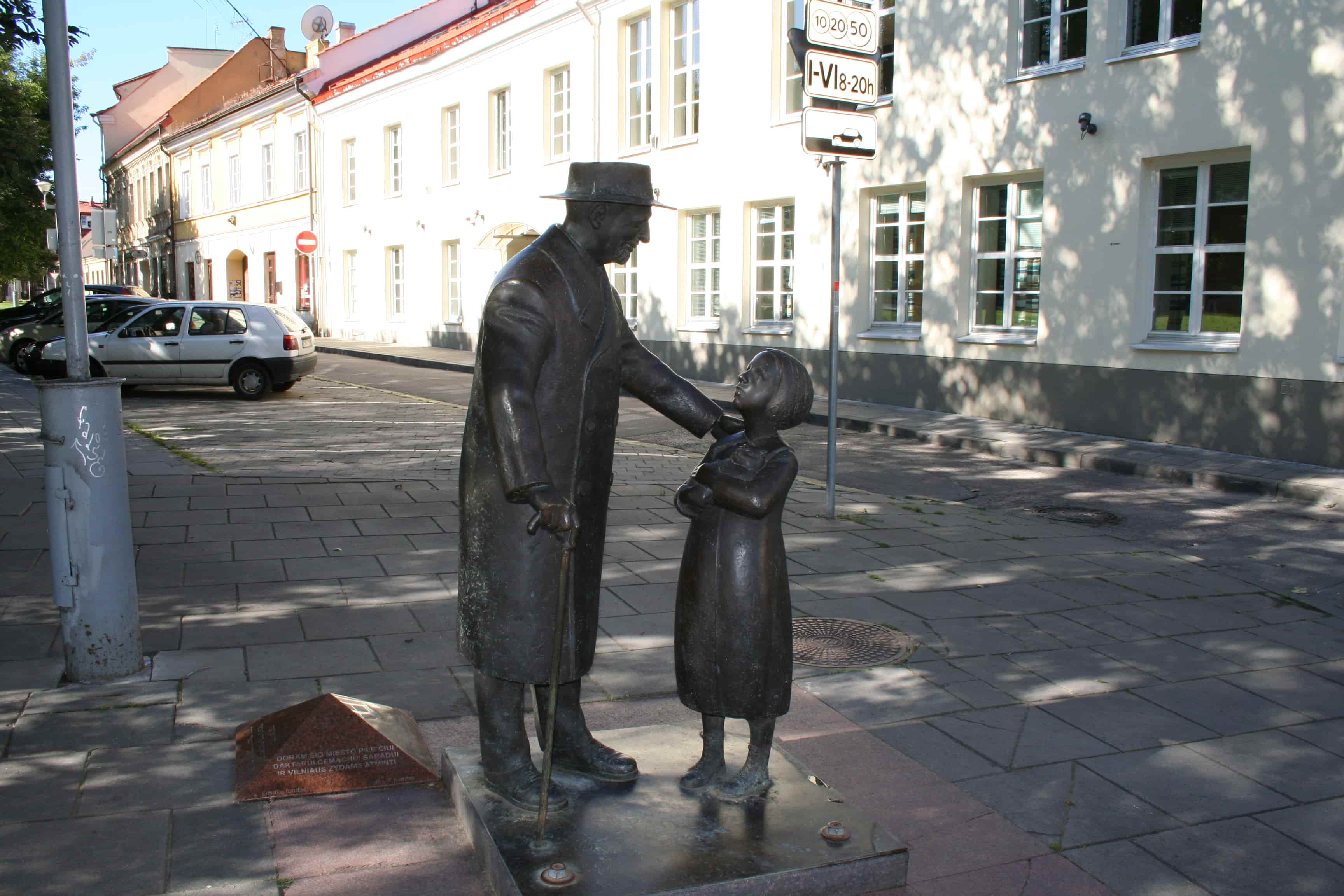 @ A monumnet to Jewish doctor Zemach Shabad who lived in Vilnius

One of the most likeable sculptures you can find in Vilnius Old Town is dedicated to Zemach Shabad (1864 - 1935). He was a Jewish doctor who was active not only in the health care, but also in education, charity and other social activities. He is also often called the prototype of Doctor Aibolit (Rus. Доктор Айболит) – the main character in the Russian children’s book. That is why the monument is showing the doctor with a girl and a kitten in her hands. The monument is located on Rūdninkų str, in the territory of Big Ghetto, but it makes you leave the sad history of the WW2 behind for a while as the doctor is kindly smiling and the nose of the kitten has become a spot for making wishes. So don’t miss the chance to meet the great doctor and touch the nose of the kitten!

You can also find a a monument to the victims of Vilna ghetto in front of Jewish Cultural & Information centre on Mėsinių street.

Probably the most famous Jew who lived in Vilnius was Vilna Gaon. You can find a monument dedicated to him on Žydų street in the site where he once used to live.

The newest monument connected with Jewish history in Vilnius was unveiled in October, 2020 on Lydos street depecting a water carrier. This monumnet was inspired by a poem "City" written by a famous Jewish poet Moyshe Kulbak who lived in Vilnius.

If you venture out of historical Jewish quarter you can find even more monuments to people connected with Jewish history, like Leonard Cohen, Romain Gary, Chiune Sugihara.

Vilna Gaon museum of Jewish history has two separate departments in Vilnius. Holocaust exhibition (Pamėnkalnio str. 12) and Tolerance center (Naugarduko str. 10/2). The Holocaust exhibition covers the most important details from the WW2 Jewish history: the establishment of Vilnius Ghetto, resistance in the Ghetto and the saving of Jews. The museum also teaches people how the Soviet government treated cultural heritage and historical Jewish sites in Vilnius. While the Holocaust exhibition gives you much information about the Jewish tragedy during WW2, the Tolerance center covers more of the cultural side. A part of the museum is dedicated to a famous Litvak artist – Samuel Bak who was a prisoner of Vilna Ghetto and survived the holocaust. You will also find a permanent exhibition “A rescued child of Lithuanian Jews talks about Shoah”. Visiting both museums would guide you well through the historical and cultural sides of Lithuanian Jews. More information about the museums and opening hours you will find on the official website of Vilna Gaon museum of Jewish History.

Paneriai memorial was established in the site where thousands of Jews were shot during WWII. This mass killings site is located around 10 km from Vilnius Old Town in Paneriai forest. You will find a tiny visitors information center, monuments, massacre pits in Paneriai memorial site. You can do a memorial walk to pay a tribute to Jewish tragedy. In one of the pits you will also find a copy of ladder-ramp which was used to burn the bodies to hide the evidence of mass killings. A group of Jews were allocated to do this terrible task. Some of them managed to escape and you can learn their escape story in Visitors Information Center.

You can visit Paneriai memorial at any time, however if you want to visit the the information center, yous should check the opening times on Paneriai Memorial website.

If you decide to visit the memorial, we recommend you taking a train from the main Vilnius train station. It takes around ten minutes to get to Paneriai station. You will need to walk around 1 km to get to the memorial. However it is very easy to find as you can see the sign showing the direction once you get off the train. It is also possible to take a taxi or public transport, but it will take you longer.

5. The site of Jewish Labor Camp on Subaciaus street

After the liquidation of Vilnius Ghetto in 1943, around 1250 Jews were transferred to HKP Labor Camp established on Subaciaus street (building 47 and 49). Jewish families from Vilnius Ghetto were inhabited  in two yellow buildings previously built for poor Jews in Vilnius. The founder of the camp was Karl Plagge known as the Good Nazi. He warned Jews of the camp about Nazis' plans so around 150 people hid in hideouts and managed to survive. One of the survivors of the camp is Samuel Bak. You can find his paintings in Jewish Tolerance Centre. Recently a documentary was made about Karl Plagge and HKP Camp called The Good Nazi. An interesting things about this place is that afte the terrible tragedy of WWII, people still live in those apartment buildings where Jews used to hide and quite a few died. You can also find huge monument to the victims of the camp between two buildings and a memorial plaque In English with information about what happened here.

I hope these five recommendations will help you to discover Jewish history in Vilnius. If you interested in learning more, check out our blog post about Jewish cemeteries in Vilnius or join our Jewish Vilnius tour to walk around the former Vilnius Jewish quarter and Vilnius ghettos with a professional local guide.

When the Jewish community moves in to a new location, one of the first thing they try to do is to find the location for cemetery. Establishing a cemetery always has been essential in Judaism – i Read more ...

Synagogues in Vilnius - what is so confusing about them?

Updated 23/11/2020 Until WW2 Vilnius was known as ‘Jerusalem of Lithuania’. At least one third of the people living in Vilnius were Litvaks – Lithuanian Jews. There were more than Read more ...