If you’ve ever done any research on Vilnius, especially sightseeing in Vilnius, we are sure you’ve heard of the district of Užupis, in Lithuanian literally meaning “beyond the river”. And as it’s one of the top places to visit in Vilnius, we’re serving you five facts you should know about Užupis.

Yup, it’s no ordinary district! On 1 April 1997 Užupis declared independence and since then the community celebrates independence day every year on April fools day. As a “legitimate” republic, Užupis has a constitution, an anthem, its own currency, even a president, a cabinet of ministers and ambassadors. In fact, you can become one! By being creative you can choose your own title and become, for example, an ambassador in metal music or rock climbing. To find out more check out our blog post on how to become an ambassador of Užupis.
As for the constitution, it is quite unique. First of all, it’s hung up on a wall and written in more than 40 languages, so you’ll probably find a copy in your native tongue! (There’s even one in Latin and it was blessed by the pope.) Speaking about its contents, well, we would really recommend seeing it for yourselves in person, here’s its location. However, just to get you excited, one of its points states this: a cat is not obliged to love its owner, but must help him in time of need. How cute is that? 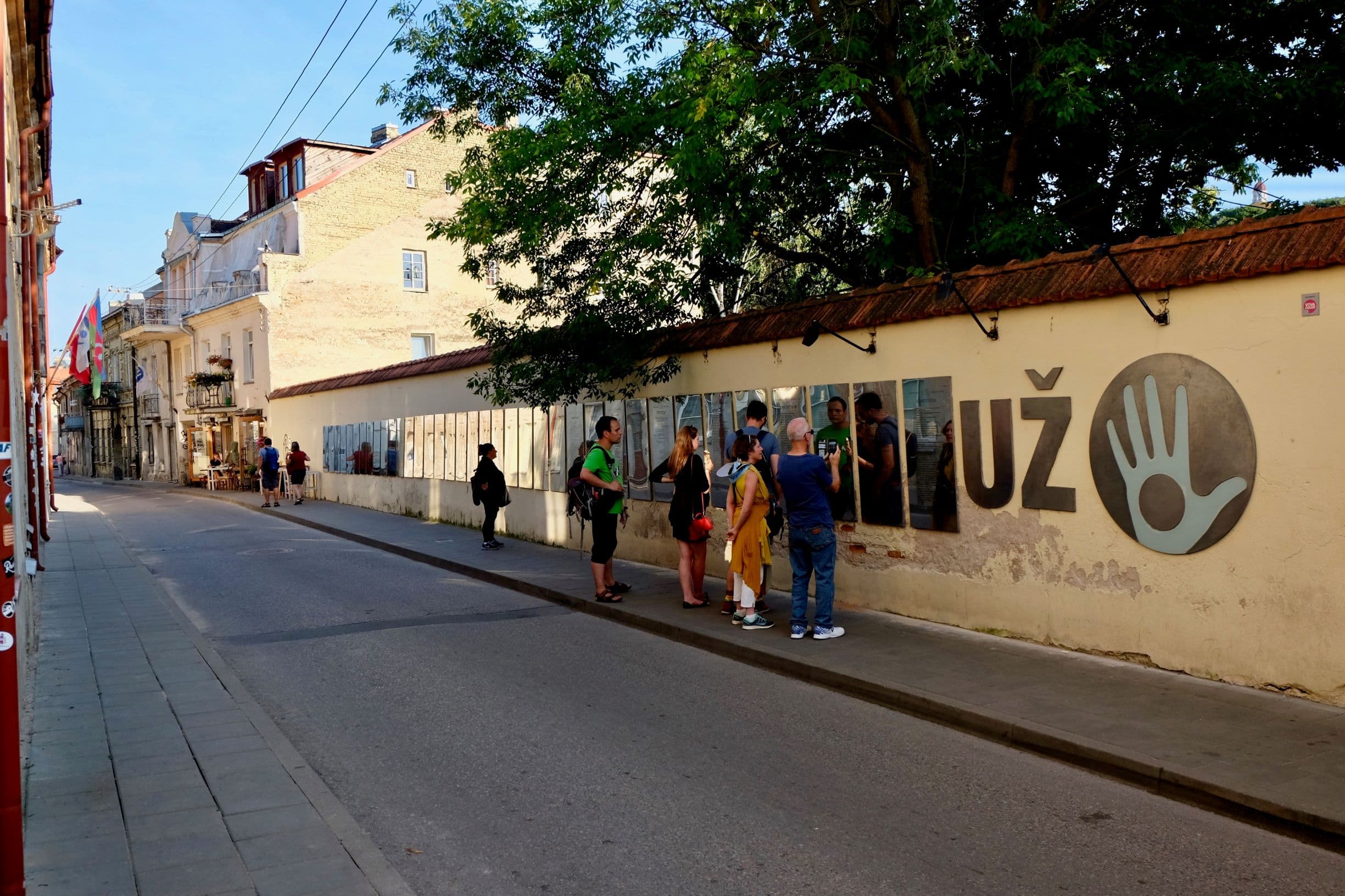 Tourists reading the Constitution of Užupis

2. It’s the artistic district of Vilnius

As the Vilnius Academy of Arts is situated in Užupis, it’s been attracting various artists since the 90’s. So much so that in 1991 they began creating a community inside an abandoned house which evolved into Užupis Art Incubator created in 2002 by local artists and the Municipality of Vilnius. It’s an artistic space filled with installations, murals and sculptures in the open-air. There’s even a piano in the river! And that’s not the end. One of the symbols of this district is a sculpture of a mermaid on the bank of the river Vilnia, another wonderful testimony of the artistic side of Užupis. Legend has it that the mermaid attracts people from all around the world and those who are unable to resist her spells, remain in Užupis forever.

So if you’re an art lover, visiting Užupis should definitely be among your top things to do in Vilnius.

Here’s a little list of the locations of artistic spaces you can visit in Užupis:

3. It hasn’t always been this glamorous

However, the so-called Montmartre of Vilnius didn’t always use to be as charming as it is now. In fact, during the Soviet era it was a hugely neglected area with abandoned buildings, mostly occupied by dodgy squatters. Only after Lithuania declared independence has the district started to regenerate and attract artistic souls. Right now, the real-estate prices there are way too high even for the middle class, yikes! So as we can see Užupis has come a long way before becoming the pretty and vibrant Vilnius attraction it is now.

4. Its centerpiece is an angel

And not just any angel! It is said that the angel - the symbol of Užupis - has hatched from an egg. That is, from an egg sculpture that was once placed at the exact same spot where the angel is now. This hatching could be seen as a metaphor for the district itself - a beautiful bronze angel was born just like Užupis became the cozy place it is now. The angel is blowing a trumpet announcing the free spirit of the district. Actually, the sculpture is dedicated to Zenonas Šteinys, a Užupian artist who was one of the initiators of the revival of this area.
The centerpiece is definitely the most well-known symbol of Užupis. We, locals, always use the angel for directions: “where is that pizzeria you wanted to go to?”, “oh on the right of the angel!”
As we love it so much, we truly believe seeing the constitution of Užupis should be on your list of things to do in Vilnius.

Last but not least: Užupis is one of the main features of our tours! If you thought that the angel-hatching-from-an-egg-sculpture story was strange and incomplete, come to our Vilnius Free Walking tour where our passionate guides reveal all the secrets of this anecdote! And ask other questions, too! We promise to show you the best places to see in Vilnius and to tell you lots of other fun stories. We can’t wait to meet you :)

In short, when you visit Vilnius be sure to dedicate a few hours to Užupis, it’s more than worth it!

7 things to expect from Chernobyl series tour in Vilnius

Hot news! Our Private Chernobyl Filming Locations Tour in Vilnius is ready and we are very excited to show you the best of it! It’s not only the places you visit, but also hear many Sovi Read more ...

5 things you should know about St. Anne's church in Vilnius

Since this iconic building is usually included in every “Top 5 things to see in Vilnius” we decided to give St. Anne's church its own list of most interesting facts. Here it goes.. Read more ...

Choosing the best walking tour in Vilnius for you

Wondering what to do in Vilnius during your stay? One of the best things to do is to join a walking tour to learn more about the city you are visiting. Sometimes travellers come to Vilnius for a week, Read more ...