The days are getting shorter and colder, local quarantines are being introduced all over Europe, events are being cancelled... Does not sound like a lot of fun. However, we recommend you to discover Vilnius and Lithuania anyways. You do not even need to step outside to do most of those activities connected with Vilnius.

Read a Book Written by Lithuanians

Yes! You can learn more about history, culture, and local customs just by reading books written by Lithuanian authors. While the weather outside is not very pleasant, there is no better way to enjoy discovering a new culture by grabbing a great local book, settling next to a window and enjoying a cup of hot tea. Not sure what to read? Here are a few recommended books you can find in English:

Kristina Sabaliauskaitė. Vilnius. Wilno. Vilna. Three short stories (2015) - written by a native Vilnius resident, this book gives you different perspectives on recent Vilnius history from the point of view of three people of different nationalities: Lithuanian, Polish and Jewish. The book will give you a great idea on the complex history of Vilnius.
If you are interested, you can buy the book on Amazon.

Laimonas Briedis. Vilnius: City of strangers (2016) - a great historical book representing the history of Vilnius from the very beginning until 2009. It’s written by a Vilnius local who resides in Canada at the moment. The book helps you to discover the fascinating and complicated history of Vilnius, its citizens and visitors through centuries.
Here is a link to buy the book on Amazon.

Ričardas Gavelis. Vilnius Poker (1989) - one of the best books written during the times of Lithuanian independence movement. It is a fictional book about life in Vilnius around the 1970s and 1980s when Lithuania was under Soviet rule. Four people working in a library are telling you the same story, but quite differently. Quite a brutal, violent and dark book, but gives you a good overview of Soviet Vilnius.
Check the prices on Amazon to buy this book.

Rūta Šepetys. Between Shades of Gray (2011) - a historical fictional novel about one of the darkest stages of Lithuanian history - deportations to Siberia - written by an American-Lithuanian to present to the world the story of Soviet repressions to the Baltic people. The story is about an intellectual family of Lithuanians who were deported from Lithuania in 1941 and how their lives went on. A perfect book to understand the fate of Lithuanian deportees. In 2018, a movie was made based on this book called Ashes in the snow with some famous actors like Martin Wallstrom or Bel Powley. But we prefer the book ;)
If you want to get the book, you can find it on Amazon.

Alvydas Šlepikas. In the shadow of wolves (2012) - it is another sad historical fictional book talking about the fate of German children from Kaliningrad region who were forced to leave their homes and look for shelter across the border in Lithuania after WWII.
You can also buy the book on Amazon.

We hope those five books will help you to discover Vilnius and Lithuania. If you have any other recommendations about must reads from Lithuania, let us know in the comments and we will update the article.

Watch a Movie Connected to Vilnius or Lithuania

Another way to spend your time during the long and cold evenings of November is to watch movies or documentaries about Vilnius, Lithuania or made by Lithuanians. We have a few recommendations for you:

The Hunt for Red October (1990). A Hollywood movie about escape from Soviet Union based on the book which was inspired by the real escape story of a Lithuanian ship captain played by Sean Conery. You can rent it on Google Play.

Hannibal Rising (2007). You might be wondering how this is connected to Lithuania. Well, thanks to Thomas Harris (the author of the books about Hannibal Lecter), the fictional character Hannibal Lecter comes from Lithuania. We do not know why Thomas Harris chose Lithuania to be the birthplace of this cruel serial killer, but we can guarantee you Lithuania is one of the safest countries. Check our blog post about how safe Lithuania And Vilnius are.
You can find Hannibal rising movie on Netflix in some countries and Amazon Prime.

The other dream team (2012). You might have heard Lithuanians saying that basketball is the second religion here. Watch this amazing documentary and learn why we are so crazy about this sport. The documentary tells you the story of Lithuanian basketball players getting acknowledged by the world in the 1992 Barcelona Olympic Games, only two years after Lithuania declared Independence from USSR. Everyone knows the USA basketball team was the dream team that year. But our basketball players were the other dream team dressed in fantastic Grateful Dead T-shirts! A must see not only for basketball lovers. You can watch the full documentary on Youtube with English subtitles.

Acid forest (2018). This is a bit of an unusual and creative documentary filmed in the forest in Curonian Spit on Lithuanian seaside. Cameras and microphones were placed around the platform where tourists come to see the dead forest and cormorants. These birds destroy the pine trees by pooping on them. Yes, you read it correctly. It is very interesting to see how different people from different countries react to this place.
Unfortnately I was not able to find the link where you can watch it online with English subtitles.

Ruta (2018). A documentary about our beloved swimmer Rūta Meilutytė who won a gold medal in the London Olympics at the age of 15. It’s a touching film about the life of a young woman athlete, her achievements and the struggles she had to face. Created by two close friends of the swimmer herself, the film shows very intimate details and presents Ruta in a very open way. By the way, music for this film was created by one of the best Lithuanian electronic music producers Leon Somov, so the soundtrack is also about to blow your mind.
It seems like this movie is also unavailable in English.

Some other cool documentaries made by Lithuanians we haven't had the time to check out yet: Wonderful Losers: A different world (2017) - a movie about the proffesional cyclist race Giro (you can actually find it on Amazon Prime), The Ancient Woods (2017) - a movie for nature lovers to enjoy beauty of old forest and its inhabitants.

MOVIES OR TV SERIES MADE IN VILNIUS:
Vilnius is quite a popular city to make movies or TV series among foreign directors. There were quite a few of them filmed in Vilnius recently by HBO, Netflix, BBC and some other giants in the industry. Here are the most well-known films and TV series filmed in Vilnius:

Chernobyl TV Series (2019) - the winner of Golden Globes 2020. The TV series tells you the story of the Chernobyl disaster in 1986 in Ukraine. Quite a few places were chosen in Vilnius to shoot Chernobyl. Probably the most interesting spot was Fabijoniškės neighbourhood full of Soviet apartment buildings to recreate the evacuation from Pripyat. You can easily go to Fabijoniškės by yourself or take a private tour of Chernobyl filming locations in Vilnius if you want to learn all the backstage gossip.
You can watch Chernobyl on HBO. 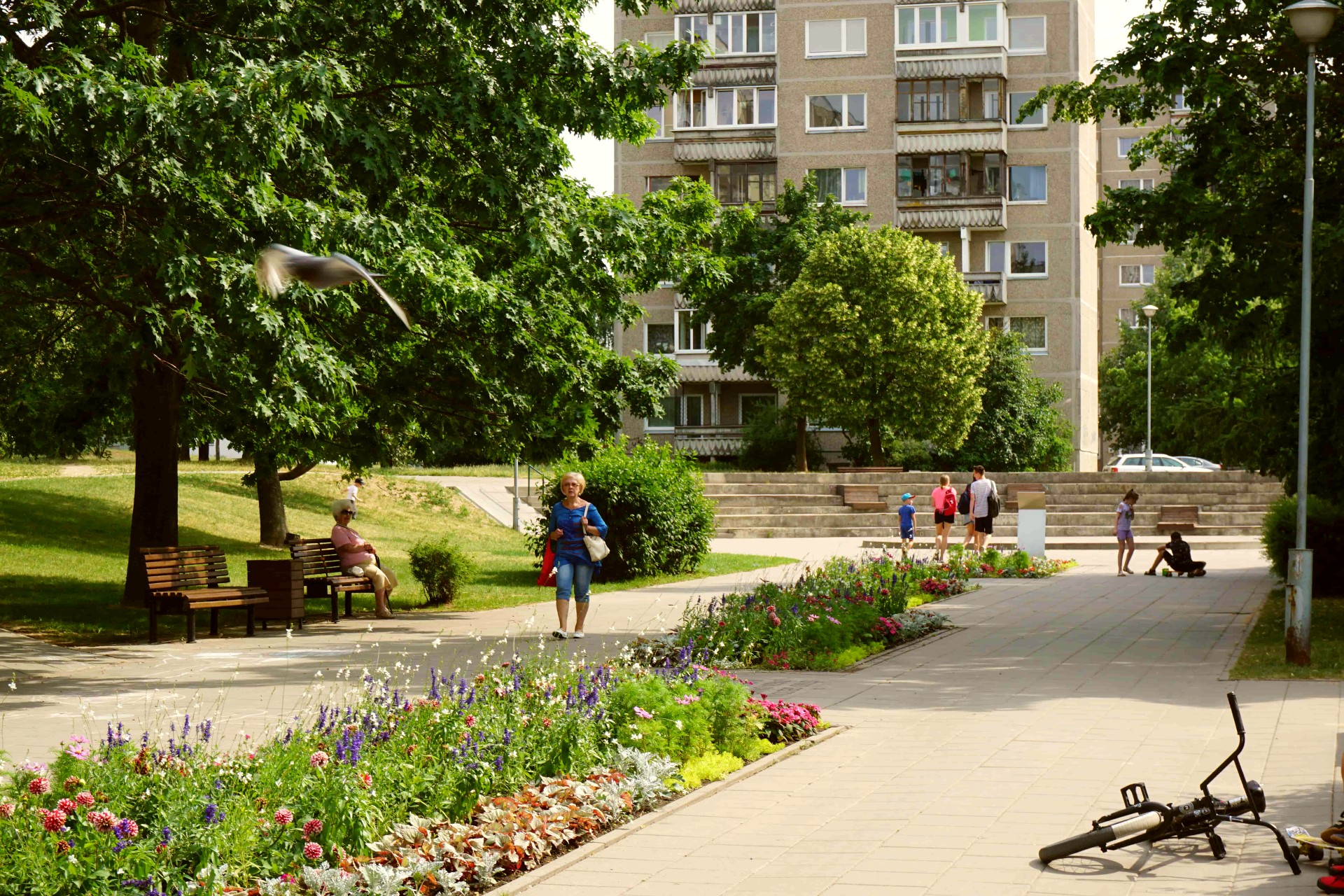 Tokyo Trial (2016). Historical drama miniseries (nominated for Emmy awards) about over 2 years long Tokyo Trial after WWII to judge Japanese war criminals by eleven judges from all over the world. When you think about it, Japan and Lithuania are not that similar, so many things had to be created. But thanks to the filming of this movie, we have a Japanese Garden in Kairenai Botanical Garden you can visit today.
You can watch Tokyo trial on Netflix.

Catherine the Great (2019) with Helen Mirren who was nominated for a Golden Globe for the part of Catherine the Great in miniseries partly filmed in Vilnius. The story of Russian empress and her 34-year-long rule of the Russian empire. Helen Mirren met with Lithuanian president Dalia Grybauskaite during the filming of the series and said she would be glad to play our president one day.
You can watch it on HBO.

Spoiler alert - some parts of Stranger Things have also been filmed in Vilnius recently!

There are many cool Lithuanian designers creating original clothes, accessories, jewellery and other products. You can find most of the brands in the store LOCALS.LT in Vilnius. However, they do not have an English eshop yet, so here are a few local creators you can check out online.

Vilnius is trying to attract more travellers every year. Right now the tourism industry stopped for a while, but you can check these cool campaigns made by Vilnius and get ready to discover this beautiful city when travelling is back on track again.

Vilnius - the G-spot of Europe

Did you know that Vilnius is the G-spot of Europe? "No one knows where it is, but when you find it - it’s amazing!" This is how Vilnius tries to attract tourists from all over the world. This ad got a lot of attention not only in Lithuania, but also worldwide. John Oliver talked about it on his show. It does not happen very often! Check it out!
Vilnius also got the international award for the best destination campaign at International Travel & Tourism awards in London in 2019. You can build you own pleasure map in Vilnius depending on your interests.

Do not forget to check the promo videos.

Vilnius: amazing wherever you think it is

Another promo made by Vilnius last year - Vilnius: amazing wherever you think it is. While travelling around the world, we are used to seeing confusion on peoples’ faces when they ask where we come from. Vilnius decided to use it for another promo. Try to locate the city on the map, check 30 reasons why Vilnius is amazing and learn what to do in Vilnius. Do not forget to check the promo video. Did those ads bring you to Vilnius? :)

If you feel like reading books or watching movies is too slow for you, you can learn some traditional Lithuanian dances. They are so easy to learn for anyone, so check out this video introducing you to Lithuanian Folk Dances. Let us know in the comments what’s your favorite move.

Choose a Vilnius City Tour You Will Join Once Possible

Our Vilnius free walking tours and paid Vilnius city tours will not be running due to COVID-19 related restrictions until further notice, but you can still check the most interesting walking tours in Vilnius for you and join our great guides once possible. Check our blog post about choosing the best walking tour in Vilnius, pick the tour that suits your interests the most and let's meet as soon as possible! If you have attended our tours, you can share your experience on Tripadvisor, Google or Facebook so other travellers can find us!

Is it safe to travel to Lithuania and Vilnius?

Personal safety is really important factor when choosing a travel destination. After all, you will be far away from home, in a new and unknown environment, with limited knowledge of local language or Read more ...

Wondering when’s the best time to visit Vilnius? That is a typical, yet essential question considering that Lithuania has four truly distinct seasons. The temperatures vary from the extreme 30&d Read more ...

The whole world is tired of the global pandemic. We have been living with a new virus for almost two years. Here you can find the most important recent information about restrictions &a Read more ...